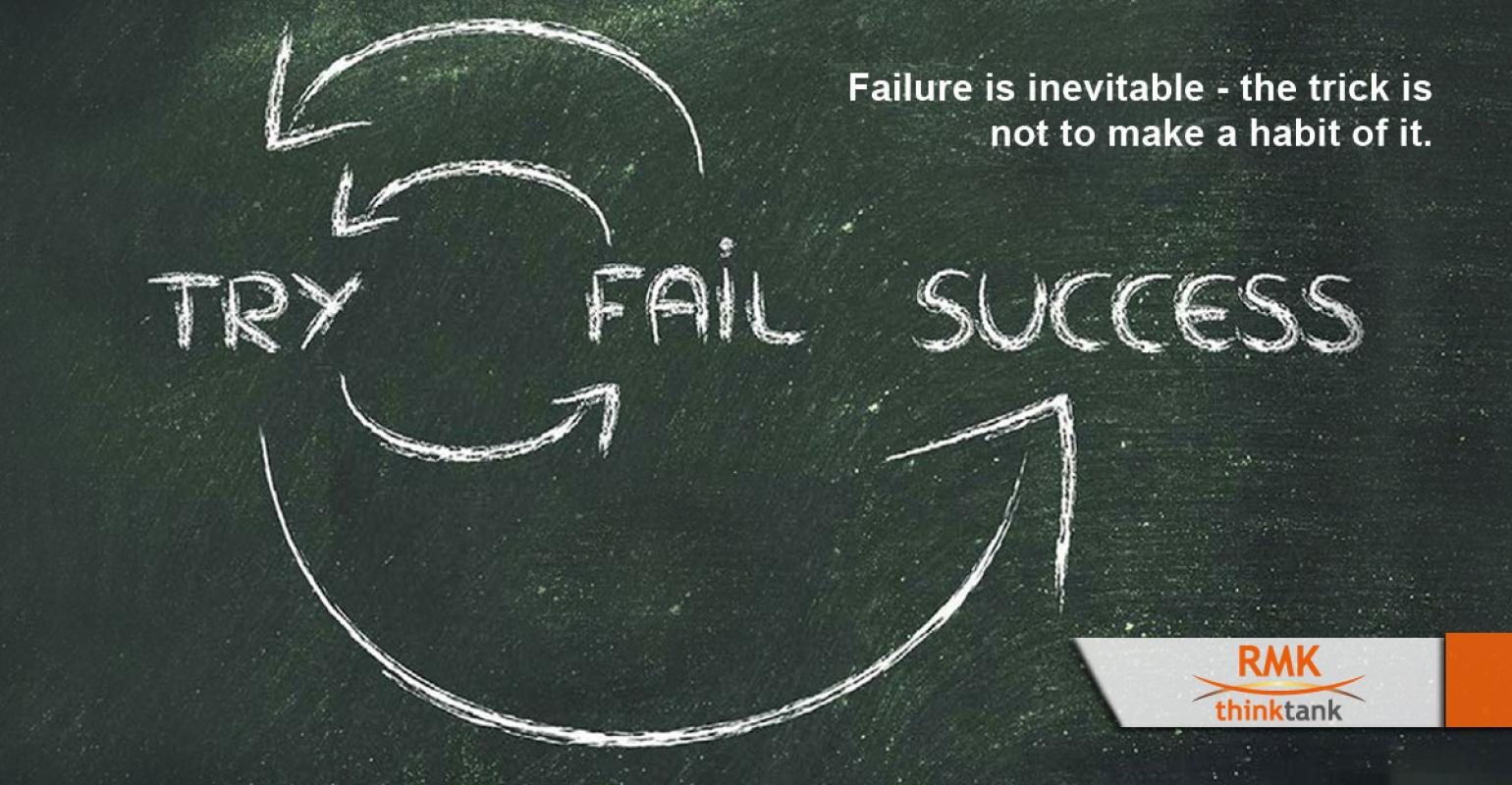 Europe's failure to deal with failure

You learn very little or even nothing from winning. The act of failing, however, can lead to great wisdom, business success adviser Reinhold Karner says.

Have you ever failed?

Failure is human – it can happen to anyone. That doesn’t take off its cutting edge – it’s unpleasant, sometimes dramatic, and often feels like a bereavement. However, failure could also be the start of many new opportunities, challenges, new options and possibilities.

The only thing that perpetuates failure is to turn it into a permanent state. Nature itself can look as if it is failing. But as always, nature is the greatest teacher, because when it fails, it proceeds to learn and improve – that is called  evolution.

Businesses also fail – services, products and entrepreneurs go through a cycle of ups and downs. But unfortunately – and unlike what normally happens in the US – in Europe, we lack the culture of dealing properly and in a modern way with failure. It’s almost as if we have an innate disagreement with failure. In entrepreneurship, especially, failure is a taboo – we stigmatise entrepreneurs, portray them as losers and refuse them a second chance to restart from scratch.

All this in the light of the fact that for decades, the average lifespan of enterprises in Europe has been decreasing. According to Eurostat’s Regional Yearbook 2016, the enterprise death rate for industry, construction and services (except holding companies) in the EU is estimated at about nine per cent a year, meaning that the average lifespan of a company is down to just 11 years.

This extremely conservative, old-fashioned and negative sentiment might have to do with our complex history of mind in Europe. But in the meantime, in the digital era where more and more compound eco-systems of business partner networks emerge and co-operate on a global scale – which frequently consisting of a mix of friends as well as enemies, the so-called ‘frenemies’ – and for our future, that is an ever increasing, crucial disadvantage in a global competition regarding our competitiveness, innovation and support in our education system.

So we shouldn’t really be surprised why, out of the global seven digital giants, six are based in the US and one is in China, but none in Europe.

You learn very little or even nothing from winning. The act of failing, however, can lead to great wisdom not only in business, but in life.

Failure is inevitable – the trick is not to make a habit of it. There are always failed attempts, as you have to break an egg to make an omelette. The most important thing is not to lose your track, learn and stay tuned. So, what’s the most important thing in Silicon Valley? It’s the trash bins! Because they know by concept and normality that one fails largely and has to reject 99 out of 100 ideas and attempts, to get the one real successful product or company.

So quite frequently you have to throw away all your work at an early stage, write off the investment, and radically change your project, design, development or even business model.

In Silicon Valley, this is called pivoting and is welcomed, even pushed by investors. In Europe, this sounds more than an alien concept. We persevere in what we dislike and disagree with failure, whatever it might cost at the end – this often leads to disaster.

We all take decisions and risks, every hour of every day. Whether you shoulder responsibility as an entrepreneur, a manager, a head of a family or just for yourself – that’s life. But to quote Doris Day’s famous song: “Que sera, sera, whatever will be, will be, the future’s not ours to see.” We never know from beforehand whether what we have considered, assumed and predicted by even having the best of data and experience on hand, will develop accordingly. The
only constant is change – hence, we sometimes succeed and sometimes fail. The risk of failing is inherent, always, everywhere and within everything.

What would be the alternative to avoid failure? Just stop taking decisions. In its extreme form, this would lead to inactivity, to irresponsibility, lack of civil courage, lack of independence, a complete lethargy.

A culture that does not allow failure is, from a democratic and political point of view, questionable. Because, as the Austrian-British philosopher and professor Sir Karl Popper once said in an interview with the German Handelsblatt group: “We can only gain from failing if the failure is notsanctioned by our society”.

In Germany, two-thirds of the population disagree with entrepreneurial failure and granting a second chance

In Europe, there is – as so many studies prove – rarely a culture and tolerance in favour of failure.

In Germany, for instance, twothirds of the population disagree with entre preneurial failure and granting a second chance. The situation is not much different in other EU countries.

On the other hand, especially when we look to the US, there are so many examples of famous entrepreneurs who failed in business before becoming highly successful. Walt Disney was fired by a newspaper editor for not having any imagination while Henry Ford founded two automotive companies that failed, before he was successful with Ford Motor Company.

When Steve Jobs was fired by Apple, he said how: “The heaviness of being successful was replaced by the lightness of being a beginner again.” And we all know how that story continued. Max Levchin’s PayPal was actually his fifth attempt at founding a successful company Before co-founding LinkedIn and investing in big names like PayPal and Airbnb, Reid Hoffman created SocialNet, an online dating and social networking site that ultimately failed. And Evan
Williams, co-founder of Twitter, failed miserably with his first podcasting platform Odeo.

But what happens if you fail as an entrepreneur not just here and there but to the extreme extent, going – for whatever reason – not just insolvent with your business but in consequence bust with all your personal liabilities for your venture?

In the US they just see it as bad luck and in weeks, you’ll get your discharge, hence, another second or next chance.

You’ll even be encouraged to restart from scratch, now as an even more experienced and thus more valuable entrepreneur. Quite a few appraise such an experience even as a degree from the university of entrepreneurial life.

Many US investors are in fact happier to invest in a startup where someone with such a 360-degree entrepreneurial experience is involved, as they know that, because of this learning curve, it might be very unlikely that failure will repeat itself. In the US, individual debtors – including entrepreneurs – receive a discharge by following chapter seven in a bankruptcy court within 60 to 90 days after the date first set for the meeting of creditors.

In Continental Europe, if there are by any chance proceedings for a personal bankruptcy – as this framework of law is still not harmonised within the EU and hence very different country by country – discharge will take three to seven years. That means that even if you are young, your life as an entrepreneur is most likely over.

So, should we be surprised that the 18th annual GEM report – the Global Entrepreneurship Monitor 2016/17– shows a deteriorated, worrying picture about the fear of failure in EU countries?

The fear of failure rate of the GEM is one of the individual attributes, a self-perception of a potential entrepreneur. It’s the percentage of the population aged 18 to 64 years perceiving good opportunities who indicate that fear of failure would prevent them from setting up a business.

That’s the reason why I focus a lot as business success adviser to help entrepreneurs to stay successful, to overcome difficult times – whatever happens. Hence, my motto is: “To be successful isn’t the problem. But to achieve enduring success is! To be sustainably successful is a great art, a perpetual challenge which follows its own rules and realities. Memento mori!”