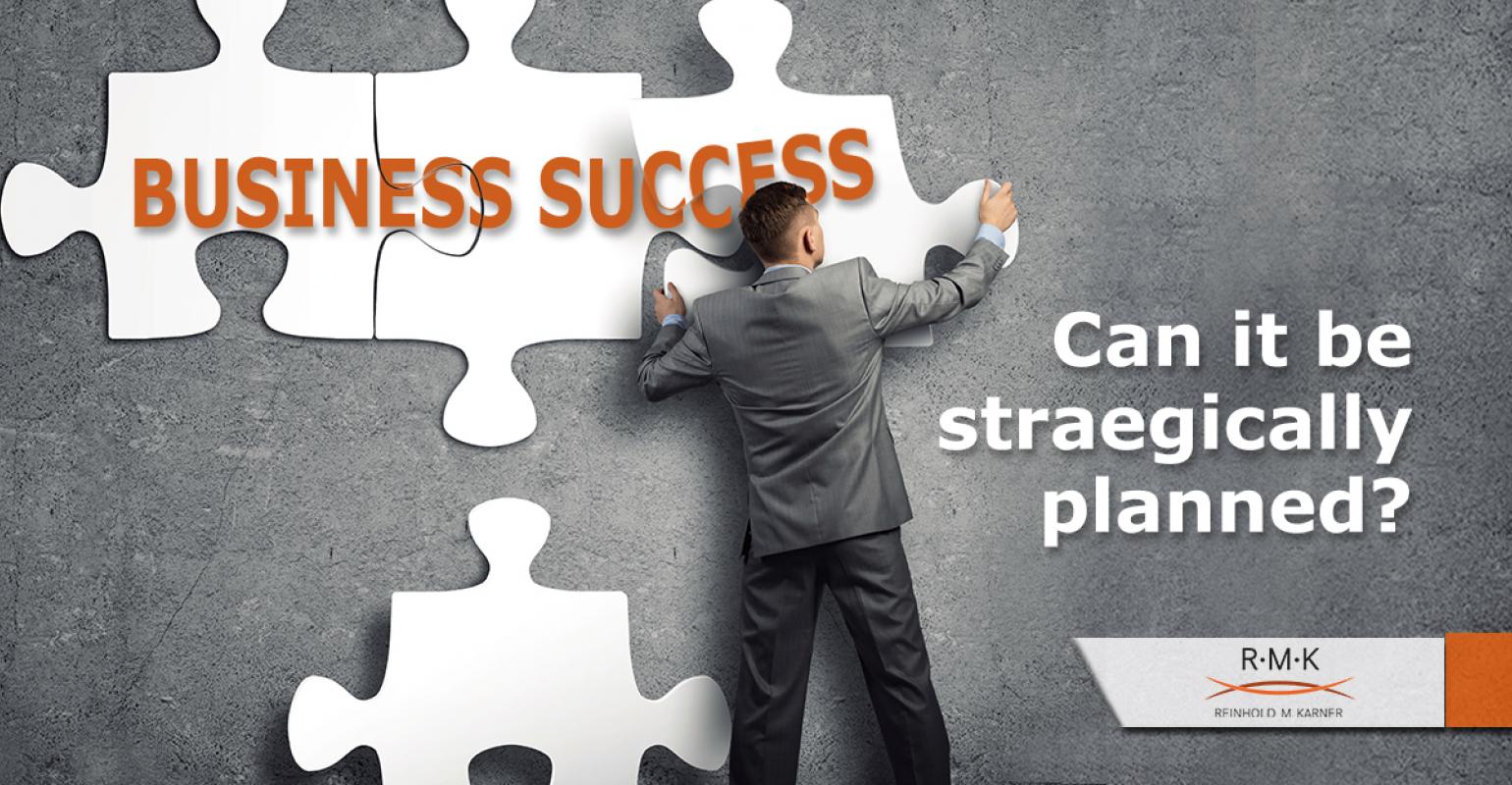 Business success: Can it be strategically planned?

(My article was first published in the Sunday Times of Malta.
Online-link "Business success: Can it be strategically planned?"
or is as a PDF of the print version here to find.)

In addition to internal efforts, companies invest €30 billion annually in strategy consulting. By analysing core questions such as where are we now, where do we want to be and how do we get there, plans are drawn up to make long-term corporate goals achievable, despite uncertain conditions. In doing so, strategists try to consider all factors from the outset.

However, numerous studies show that 50 to 90 per cent of all strategic initiatives fail or will not be implemented. As early as the late 1970s, the Israeli cognitive psychologists Daniel Kahneman (Nobel laureate) and Amos Tversky soundly questioned long-term planning processes. In what they called the “planning fallacy” – a cornerstone of today’s behavioural economics – the scientists concluded that people and organisations generally underestimate the tendency, time, costs and risks of future actions and overestimate the benefits. They proved how feeble rational planning models are.

US financial economist Robert Bruner analysed M&A transactions for decades. Confirming the findings of Harvard economist Albert O. Hirschman, he concluded that about 80 per cent of implemented strategic plans failed to achieve their objectives and the planned success. This is also true of the actual efficacy of high-quality analysis and business planning pertaining to other related venues.

Additional causes are put forward for the overwhelming failure of traditional strategic planning, including unclear visions, organisational inertia, underestimated environmental dynamics, sloppy analyses and too little management discipline. They may all be more or less true but viewed soberly; the leading causes lie in a number of decisive errors in thinking.

The market itself is only a constructed dimension, a construct, like the concept of intelligence. Intelligence in itself does not exist. There is only ever one specific intelligence, such as practical, mathematical, linguistic, spatial, aesthetic or theoretical intelligence. You don’t really know whether someone who is said to be intelligent is above average in all these areas. Someone can be extremely intelligent in practical life but totally inane mathematically.

There is no such thing as the market per se. It is something that ultimately no one really understands. Market research and futurology serve our need for advice, control and security, but they don’t really know any better (see my article ‘Who knows the future?’ Classified, January 2). The market is the white unicorn, the animal that everyone thinks they know and yet have never seen. It is a chameleon that is constantly changing, completely unpredictable. Tomorrow, he is already another. His only constant factor is us humans.

The idea that success can somehow be logically derived or even planned with a few tricks of the trade is nonsensical. It does not follow a mathematical equation. How much growth, business, profit, market dominance etc, a company will achieve in five or 10 years cannot be calculated with input, financing and product parameters. And that’s because the market is a free mass that constantly fluctuates back and forth. It does not behave congruently and explainably because its only constant is people, not puppets.

Success works according to other laws. The strategy must fit the product or service and simply follow common sense. This is perhaps the best recipe for success, for sole proprietorships, start-ups and SMEs. What do I want to do? How much effort does my venture require? Who benefits from it? Is there even a demand for it  or am I capable of creating one? If so, can I offer it at a reasonable price-performance ratio and still earn money? Or is what I am doing frippery, completely useless, superfluous and, what’s more, harmful and expensive? If there are already other providers in the segment, then my offer must be more attractive or complementary. It can be more expensive, as long as it is more exclusive, more individualised, better or sensibly expanded.

These are the core questions. They have not changed for thousands of years. Even when the barrel and the wheel were invented, the same canon of questions applied.

But the most important thing of all is knowledge of human nature, understanding which human need is ultimately being served by a product, a service. What makes people tick? What do they want, like, dislike, value? What do they do and what do they want to work around?

An entrepreneur – a boss – must not delegate these reflections. Rather, they can simply test their reflections themselves in their environment, among friends, acquaintances, colleagues and potential customers. They should spread out the need they believe they can satisfy with their product, like a fan. Then it becomes clear whether they can serve the core, the entire spectrum or only very specific marginal areas.

It is essential to remain realistic. It is futile to dream up how people or the world should be: more rational, ecological or generous. It is important to respond to real needs and circumstances. If my entrepreneurial activities make the world and the future a little better, a little happier, healthier or more pleasant, then that’s a beneficial side effect. It is also not advisable to start with products, services or trading places that you know nothing about. The lovely saying ‘let the cobbler stick to his last’ is a valuable guide, not a limit but a safeguard. Only later, gradually venture into the adventure of the stranger before.

Remember that no product has ever been successful if at first a market for it had to be created and for which there was previously no need. Some think this was achieved with the mobile phone market. True, there were no mobile phones previously, nevertheless they are only a further development of the telephone and still serve the age-old need for communication over distances. In the past, this was done by letter, stagecoach or carrier pigeon, later by telegram, and now by telephone, fax, SMS or e-mail. The mobile phone market was only a technical development of a market that had always existed. Steve Jobs accurately proclaimed at the first presentation of the iPhone in 2007: “Apple is going to reinvent the phone” – he didn’t claim having invented it per se.

Another error in thinking is the assumption that a strategy concept developed according to standardised management theories − in line with the ‘one-size-fits-most’ approach − would be the ultimate. Whether I want to sell disposable paper handkerchiefs for all age groups and nose types worldwide or dressage saddles with long pommels in a niche market, should make a significant difference.

It is important, especially for individual companies and SMEs, not to listen to all the so-called experts, not to let them drive you crazy. You don’t have to change and adapt to the masses constantly. On the contrary, stubborn and stoic as a donkey, the entrepreneur should stick to his previously well-considered position − or let’s call it strategy − with common sense and knowledge of human nature. He should not deviate from it until the point comes when the breakthrough is achieved.

For larger or internationally active companies, it is, of course, much more complex because there is no universal knowledge of human nature for all peoples, countries and cultures. A new guide for building strategies that have already been tried and tested in practice is handy here, according to the book Open Strategy (www.openstrategy.info).

Published in October 2021, the work established itself as a world bestseller for strategy books within a few weeks. And it became the best strategy book 2021. The authors, the brilliant strategy experts and university professors, my dear friend Dr Kurt Matzler and his colleagues Dr Julia Hautz, Dr Christian Stadler and Dr Stephan Friedrich von den Eichen, were even nominated for the Thinkers50 Award – the ‘Oscars of management thinking’.

Open Strategy recommends opening up the strategy development process, i.e. involving people inside and outside a company. In this way, companies can use the collective wisdom of many people and communicate the strategy better. In my view, the key is to tap into the all-important knowledge of human nature of a large pool of people, their diversity. Studies show that more than 82 per cent of discoveries happen when people from different disciplines talk to each other, outside of the executive team: with frontline employees, experts, suppliers, customers, entrepreneurs and even competitors. To avoid cognitive bias, you should go beyond your organisation.

Nevertheless, the chances of success only increase significantly when everyone in the team not only knows the good ‘strategy’, its objectives and the way to get there, but also supports it, is enthusiastic about it, visualises and live it daily. Only then do you attract robust success!

P. S. I would be happy if you share my articles. A short request for permission is required for media publication or reprinting.
A copyright notice with reference to the author and the link to this website www.RMK.org is always required.