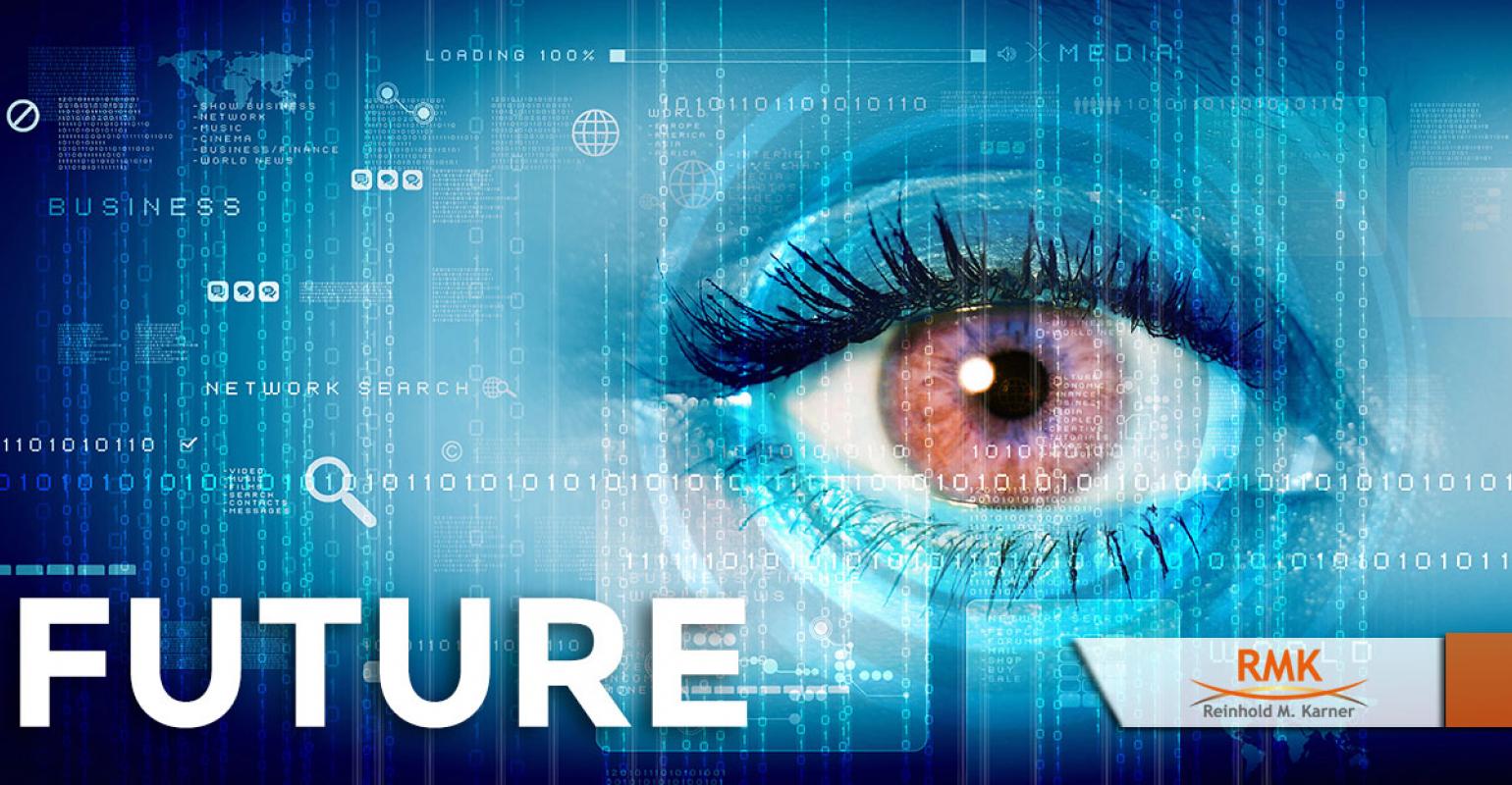 Algorithms are the secret weapons of corporations and disruptors.

A conversation with Reinhold M. Karner about the future of digitalisation and artificial intelligence (A.I.). At the cluster symposium of the Standortagentur Tirol 2019.

Relocation Agency Tyrol: Time is racing faster and faster, as is technological progress, especially in the world of information technology. Do you still have the overview, the orientation, where we stand, what - objectively - the chances and risks are, where the journey of the next years can lead?

Karner: Yes, I still do, but I have been involved for over 40 years, whether in business, in think tanks, access to the digital giants and world-leading high-tech analysts. But it remains a challenge because progress is coming thick and fast. Digitalisation and the powerful algorithms of artificial intelligence (A.I.) have long since ceased to be just "buzzwords" (fashionable terms). They are now the main drivers of the upheavals in the globally networked business world. Increasingly also in society, right into the private home. It should, therefore, come as no surprise that in the last five years alone, around 97% of all data in the world, a massive amount, has been generated. Because of such developments, some people fear that the digital revolution will mean the disappearance of the real world behind streams of data and algorithms.

Karner: Many people who often use the terms digitisation, artificial intelligence, algorithms, understandably know what they are talking about - not really what they are talking about because the topic is becoming increasingly complex and the protagonists from Silicon Valley are drumming louder and louder with their marketing messages. And bolder. It's okay to give digitalisation, A.I. and its algorithms a great deal of leverage, but to give them power as such is not without danger.

Nevertheless, digitisation affects us in many ways, not least as individuals.

Karner: Today, we are at a point where some systems somewhere in the world know us better than our mothers or partners do. With only 68 "Thumbs up", i.e., Likes on Facebook, it is possible to recognise what skin colour, sexual orientation or political orientation someone has, with 70 Likes a suitable algorithm can assess the user better than his friends, 150 Likes and the algorithm knows them better than their parents, and with 300 Likes the life partner no longer has a chance against the machine. Finally, 350 Likes are enough for the computer to know the user better than he knows himself. The essential element of the new digitalised world in the age of Big Data is the human being as the customer; in other words, the personalised data package. And you don't really want to find out what this package thinks, but how its behaviour can be controlled and predicted. Human behaviour is all the more predictable the more it moves into habits, which is usually the case. That is why they are the preferred object of desire for behavioural research in the consumer goods industry. In fact, mostly their gold mines. Behavioural specialists today are not so much psychologists and sociologists, but rather statisticians and computer scientists. Because artificial intelligent algorithms are increasingly taking on the leading role. With digital technologies today, far more information is collected, processed and translated into new knowledge using A.I. algorithms, and much faster than ever before.

So this means that the raw material of the future is not - as often quoted - data, but artificial intelligence and algorithms that interpret this data?

Karner: Although data is the rocket fuel for digitisation and A.I., they themselves are profoundly stupid, you can only analyse, correlate and compare them with statistics. Still, you can't take cause and effect from them, and there is no mathematics for that so far. And without treating cause and effect, without answering the big question of why, there is no intelligence in reality. Data can tell you that people who have taken a drug have recovered faster than those who have not taken it, but they cannot tell you why. So today we are trying a kind of semi-intelligence, machine intelligence, which has nothing to do with human intelligence. And these are the algorithms. The algorithm is ideally something like the secret weapon of a company. The best of these even take out the competition. That's what makes companies like Amazon, Google, Booking.com, Uber, etc. successful. They enable providers to do the paradox of serving a clientele impersonally-personally. This leads to truly amazing results, not only in the business world. This is why "artificially intelligent" algorithms are increasingly becoming a hotly contested commodity, a closely guarded company secret. We rely on decisions made by machines, but often we do not even know their criteria. Even the A.I. gurus usually do not know what is going on in the artificial neural networks of their machine learning systems, which "program" the A.I. models and algorithms independently, it has become too complex, inscrutable! Algorithms are therefore no longer mere aids. They sink into our decisions, evaluations, judgements. We delegate more and more human knowledge and competences to machines. Still, these systems do not always necessarily serve our interests.

How does this affect our economic activity?

Karner: It creates a radically different world! At today's speed, five years have become an eternity, also regarding decisions. Speed, surprises, sudden changes of direction in the vast global markets routinely affect the fate of even established companies. But they also open up opportunities for entirely new market participants. The (business) world has become a discontinuous one; planning is complicated. Competitors emerge almost unnoticed, suddenly bursting into the marketplace. More than 90% of all global disruptors have never worked in the industry before, successfully dismantling them. And they usually have a clear strategic DNA: "Best possible digital customer experience from start to finish - and we do it all cost-effectively, and on our own with our platforms, all we need is the Internet, no one else". Often the attacked have a significant knowledge gap especially with regard to digital technologies and their possibilities compared to the attackers, which increasingly makes them outsiders in their own industries and professions and enables the disrupters to establish themselves quickly and to push competitors out of the nest like a cuckoo.

So whoever does not participate is definitely out?

Karner: Many of the long-standing trends that made life so pleasant and predictable for entrepreneurs, decision-makers, investors and managers have broken decisively. They will no longer work. And this is the new normal! Let me give you an example: Many people, including economists, used to believe that they could assume two things in business: First, in order to grow, companies would have to hire more people. On the other hand, treating employees well was a critical success factor. Unfortunately, both of these things are less and less true today. Thanks to digitalisation and artificial intelligence, companies can now become successful, even globally, without hiring or treating people well. By 2025-2027, according to the world's leading I.T. market researcher, Gartner Inc. 60% of existing SMBs will not survive because they are tardy or even fail to recognise in time the rapid changes caused by the digital eco-systems that are currently emerging, to adapt flexibly and to participate. Decision-makers, entrepreneurs, managers and investors should, therefore, boldly throw old patterns of thinking and decision-making overboard and adjust to a new reality.

How can this succeed?

Karner: Let us first take a look at the three fatal mistakes made by SMEs on their digital journey: First, there is too much operational focus - little time is spent on strategic thinking and understanding new technologies. The second mistake concerns leadership and culture in the company: Old habits and behaviours are clinging on desperately, and significant change is only allowed if it is forced on you, but then it is often late, perhaps too late. And thirdly, it is fatal if too much focus is placed on operational management instead of innovation, disruption, change, attracting and engaging "talents" and diversity in the team. So what can entrepreneurs and managers do to prepare themselves? I see two fields for this, one related to digitisation and A.I., another one generally on the change of times and Zeitgeist: Concerning digitisation and AI I recommend five measures to avoid the worst case scenario:

1st: Leadership. Bundle forces, don't fritter away your energies, better "only" reach 80% than the unattainable perfection or fail.

2nd: decide: in which digital eco-system do you want to be involved?

4th: but also avoid rash, massive investments without really understanding if they are right for you! and

5th: use the positioning matrix to find your way, i.e. recognise to which of the four types of company you belong or want to belong tomorrow: Reformer, Traditionalist, Disruptor, Evolutionist - and then stick with it, stay on course, and step on the gas! But with brains - heart and mind so to speak - not with panic!

That sounds simple, but is it?

Karner: Yes, if you focus on a basic orientation to master the future - come what may - well. In order to drive necessary changes forward, for example, you need the fundamental insight that those who run a company must first develop the ability and willingness to think in a new and possibly radically different way, to behave completely differently. Another key is to "reawaken" curiosity and willingness to learn as in "young years" for everything and anything, to open up without a reservation. The ability to recognise, understand and monitor new situations and thus to navigate better through "the rough seas" will be highly rewarded. Also, surround yourself with the right people for these new conditions! Both diversity and youth are good ingredients, the "right spices" so to speak. Agility and fitness are other essential qualities to stay "on top" in these times of change. Most importantly, however, it is key to resist the temptation to see only problems and dangers everywhere, instead of always giving priority to seizing opportunities. Optimism will help you to win! If the immense forces of change are used correctly, the world will be a better place in ten years and more! Those who recognise the extent, the consequences of these changes early on and take them into account will be among the big winners and will be able to help shape the world and our future for the better!