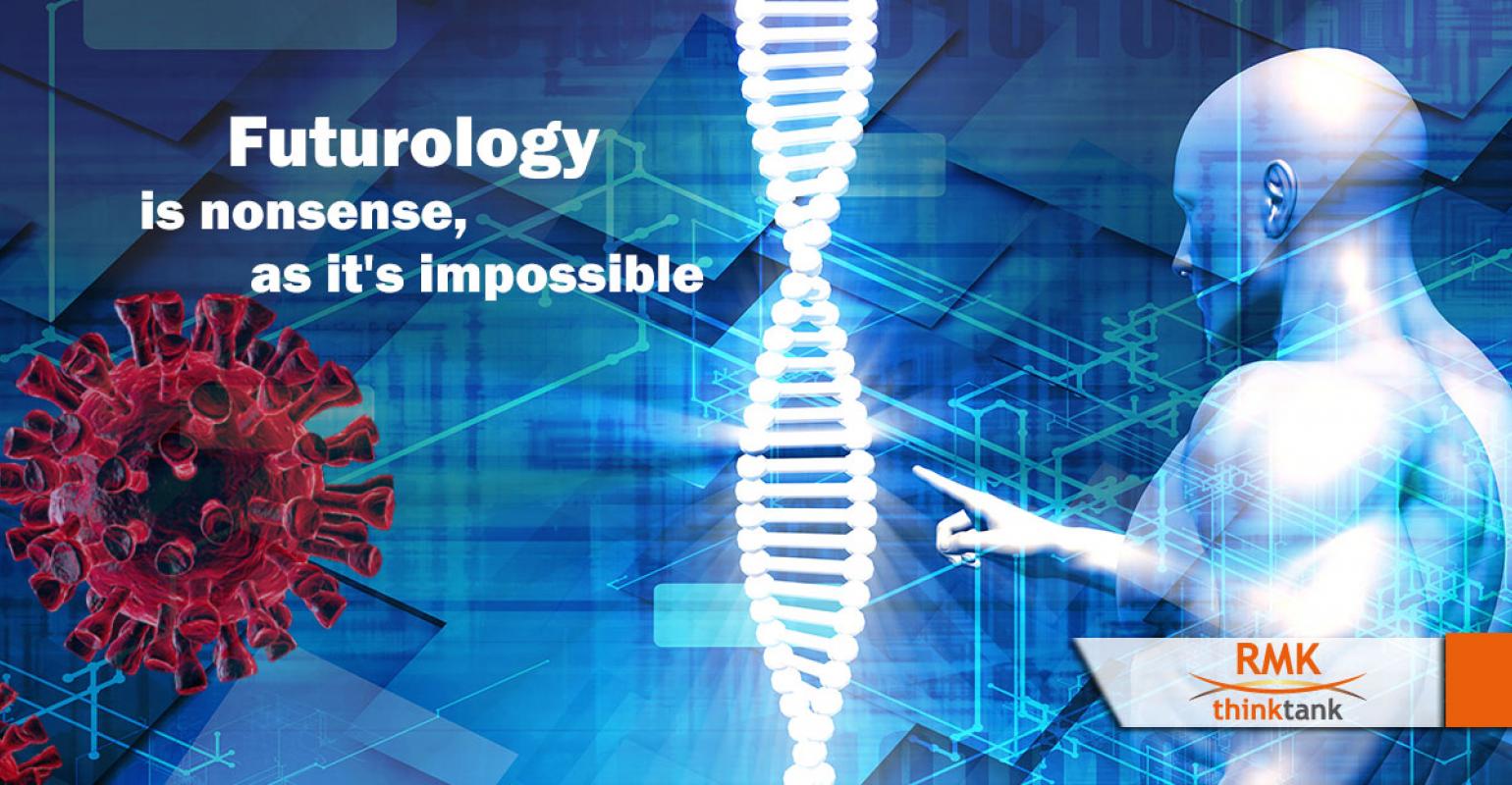 Futurology is nonsense, as it's impossible

COVID-19 has once again shown us what I have been pointing out in my lectures for years, namely how fallible futurology is. It is a bogus path and it has one serious flaw: it is not possible.

Forecasts of the future are nonsense - whether they are created through extensive analysis of data from the past, the present, through rose-coloured glasses or based on pessimism. You should not let them drive you crazy.

Most of the forecasts that go beyond a year should simply be stamped out, not read at all. Too often they are not worth the paper on which they are written. They are nonsense because nobody knows what will happen to us in 5, 10, 20, 30 or 40 years, let alone 100 years. Nobody knows what we will need, what we will use, discover, research and invent. Long-term forecasts of all kinds have only one thing in common: they are never right!

The reason is simple. The freedom of so many billions of people, nature, weather, continents, volcanoes, epidemics, bacteria and viruses, planets and asteroids, is entirely open and infinitely complex.

The topic of futurology is exciting and attractive; hence a lot of people earn a lot of money from it. An incredibly large, profitable market was established through it. Future forecasts and predictions have always been booming, not only through Nostradamus, but also during Jesus' lifetime, when people thought it would come one way or another, but it turned out differently. As the old folk wisdom says: "It usually happens differently than you think".

Futurology simply covers people's need for control. Many people want to have control - because something that one supposedly knows seems to be more controllable, no matter whether there is a reason for joy or fear, because then the future can at least be substantiated with an emotion. Everyone also chooses "his" preferred prophet according to his basic needs, who shows him his future with his best coherent primary emotion - underpinned with appropriate data and garnished with explanations and arguments, and who thus gives him the feeling of confirmation. But none of this says more about the real future than any crime fiction or science fiction literature.

Nobody has the future under control. Nobody can look into it because the future is not yet there. Even if futurologists say that they could look into the future exponentially, so to speak, one can only ask them: How should one be able to look into something that does not yet exist? Nobody knows the future! All development is entirely open, unexplainable and unpredictable. Futurologists make a habit of ignoring this and let this fall by the wayside. However, if, as is usually the case, they are wrong again, then they just follow the motto: "Yes, but today we know how it works now." Yet, what they know today will again be obsolete and outdated tomorrow. That is an invincible vicious circle for any attempt at research; you can never catch up with the future from today's view, that's why it is called the future.

One of the countless prime examples of this comes from the influential Club of Rome, where they warned in 1972, in their report, "The Limits to Growth"and which contained many collapse scenarios. Virtually every pollutant measured at the time seemed to increase exponentially. The Club feared that in the 1970s and 1980s acid rain would turn the forests of Europe into chemical deserts. We would exhaust the planet's resources within a few decades; such as oil or other raw materials such as coal. Copper would run out within 36 years, especially if all Chinese people obtained telephone lines. All of humanity would soon face self-induced famine, and so on, and so on.

However, soon the pollution not only stopped growing but also began to decrease - drastically, despite population growth. Deforestation in rich countries was also stopped. Europe's forest area grew by more than 0.3 per cent per year from 1990 to 2015. Conclusion: The industry reacted to the acid rain with sulphur filters - but otherwise the highly respected Club of Rome was wrong on almost every point in its forecasts for the future.

As Sir Isaac Newton already noted in the 17th century, logical analysis, thinking and calculation do not work with complex dynamic systems, i.e. things that constantly change over time. Quite simply, because you cannot explain the working of something alive by cause-and-effect logic alone.

One counter-argument that could be put forward concerning COVID-19 is the almost prophetic lecture by Bill Gates in his TED talk in 2015 about the potential threat of a pandemic caused by a virus. Of course, it would have been better if the world, the EU, the USA, etc., had prepared for this severe potential risk much earlier. Moreover, many ask why the westerners have failed so miserably as Asia had already been affected by such infectious diseases of enormous proportions on several occasions in the years before.

But let us not forget, when listening to prophecies, whether gloomy, sober or optimistic, even from highly respectable people like Bill Gates, it is not very risky for them to make such an assessment. Because if you are right, you get a lot of recognition and applause as a prophet, but if you were wrong, later no one is making any fuss about it.

Bill Gates, for example, was completely wrong in 1981 when he implored: "You will never need more than 640 kilobytes of memory." But he's not alone in that. Shortly before the end of the 19th century, the Commissioner of the US Patent Office, Charles Holland Duell, was sure: "Everything that can be invented has been invented". Or think of Lord Kelvin, the British mathematical physicist and engineer, (absolute temperatures are stated in units of kelvin in his honour) who was convinced at the same time as Duell that "Radio has no future".

To err is human because the future is not visible, not predictable, not measurable. If you ask five experts, you usually get five different answers. Of course, visualising the future helps because it shows tendencies and trends, which enables us to play through scenarios, to make different plans. But in the end, this will not change the behaviour of the present. At best, it will create unnecessary pressure and tempt us to do certain inane things.

The behaviour of people in the present only changes if they experience suffering in the present. Only very few change something prophylactically. And when they do, and this is the big problem, they change something that creates much more significant, new troubles. For example; palm oil, for which large areas of rainforest are ruthlessly and irretrievably cleared. Or think of the obligation to mix 10 per cent rapeseed oil in fuels, which not only means that valuable areas of cultivable land are lost, but also that the combustion engines suffer damage.

One reason for this is, as with the subject of modern, hasty innovation itself: None of this is adequately thought through and reflected upon beforehand, and most of us are not trained or able to grasp the full extent of the complexity.

Of course, it is highly understandable if, especially in times of crisis, uncertainty or threats, we humans are thirsty for orientation about possible developments and their consequences in the future. However, we should not forget that we always live in the present. Consequently, we should make the most out of it in a positive way. In this way, the need to expect the impossible - namely to know the future - becomes superfluous because the future is no more colourful than the present.

Anyone who does not live the present because it is the ludicrous, uncomfortable, unsatisfactory intermediate stage between the past and the future, accomplishes nothing! He is not alive, is only half there, can be manipulated, can be uprooted from the present and only desperately tries to transplant himself into the future, which rarely turns out to be as desired or predicted. Moreover: nothing grows in the future, it is all virtual, theoretical, tendentious, but it is not real. Nor does the farmer live from the field he will cultivate next year, but from the field he cultivates today.

Futurology is a nice hobby, but without much significance. It is a great distraction. Ideally, you should always ask yourself the key question of the ancient Roman philosopher Cicero: "Cui bono?" In other words: Who benefits from it, who will be served or supported by it? In this way, you can often quickly find the explanation for the mostly quite opportunistic prognoses for the future. True to the saying: "It is difficult to predict, especially the future". A popular bon mot attributed to Niels Bohr, frequently used by Winston Churchill, apparently an old Danish proverb.

P. S. I would be happy if you share my articles, you can also republish or reprint them for free or publish them on the net, with referencing to me as the author or this link to my website: www.RMK.org