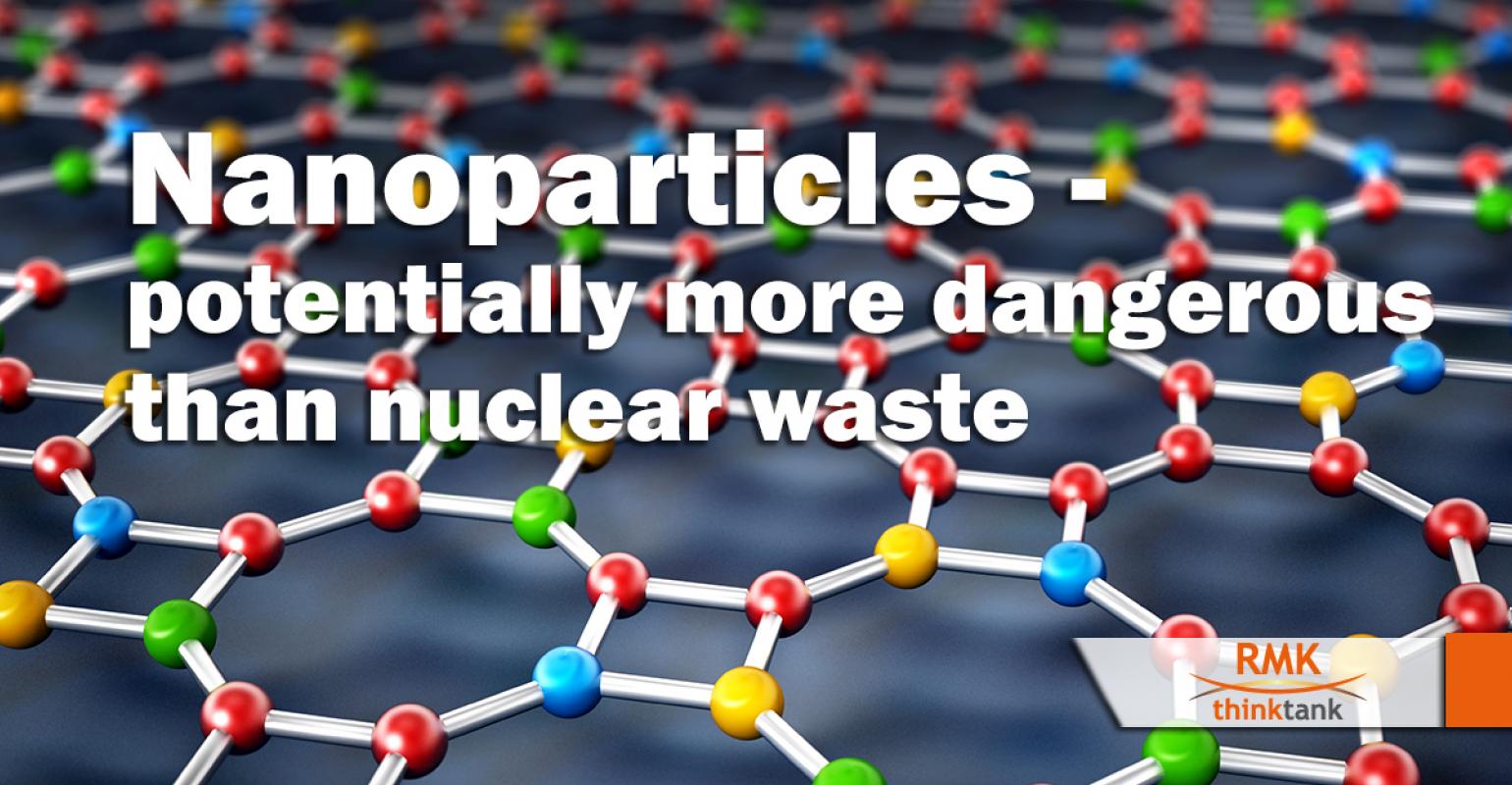 Imagine an extremely fine, for example, the net on a soccer goal, only much smaller. So small that you can't even see the mesh under an ordinary microscope. We are talking more about a filter than a net. A coffee filter, a tea filter - these are all basically nets with meshes so fine that we cannot see them. What is smaller than the meshes penetrates; what is bigger stays outside.

And now imagine that the meshes of this incredibly fine net have an edge length of one micrometer. That's a thousandth of a millimetre. This filter will stop anything larger. But what is smaller, it lets through. For example, particles 999 nanometers in size. A nanometre is a thousandth of a micrometer, in other words, a millionth of a millimetre or even a billionth of a metre. The ratio of a nanometre to a metre is comparable to that of a hazelnut to the earth.

Tuberculosis spores, or even asbestos particles, are so small that they can easily penetrate the human alveoli and remain there. Anything even smaller penetrates there as well - logically. In the case of asbestos, we are talking about particles with a size of 0.5 to 3 micrometers, i.e. from 500 to 3000 nanometers. These particles are thus 500 to 3000 times larger than a particle of one nanometre in size. So nanoparticles also penetrate into the alveoli when we breathe them in - and also into other regions of our organism when we eat them. Nanoparticles can even invade into the natural spaces of cell membranes and thus implant themselves in the circulation, into all our organs and also into the foetuses of pregnant women.

What would a net need to consist of to stop cubes with an edge length of one nanometre? Material that is finer. But there is no such thing yet. What should a net be made of to hold back the finest materials in the world? There comes a time when downsizing comes to an end. At some point in the microscopy of the whole thing, we reach a size where the structures we see are the molecules themselves. A molecule of haemoglobin, for example, the protein complex of the red blood cell, has a diameter of about 55 nanometers.

This is precisely the problem with nanotechnology: small particles penetrate all filters and meshwork. Because a filter that stops everything does not yet exist. Because it would also have to stop the particles of which itself consists. The filter structure would be finer than the smallest particles in the world - that would be a paradox.

Nanoparticles have no half-life

At first glance, nano-materials and nano-substances are very tempting because of their applications. Their properties and functionalities result in e. g. higher strength, lower weight, improved conductivity, self-healing, self-cleaning and anti-reflection. These are all advantages that make some substances and materials easier or more attractive to use.

Thus, the emerging nanotechnology ("nanotechnology, NT") is a promising future multi-billion-dollar business area. China is the world leader in nanotechnology innovation, with more than 200,000 registered patents. This figure is twice as high as that of the second-largest player in the market, the USA. Nanotechnology is a strategic hype for nations - everyone wants to be involved and not miss the boat. At the same time, the focus on the risks is largely neglected.

The number of ideas and applications for nano-materials and nano-substances is just beginning to explode. But we already find them in food, paints, as coatings for rain protection or hard lacquers on glasses, in toothpaste, sunscreens, medicine, ceramics and clay, as carbon nanotubes for electronics and optics, in circuits of computer chips, in chemistry and various technics and many other areas.

The ability of nanoparticles to overcome all barriers, such as the "Terminator 3" made of liquid metal, can also be used to place active substances specifically in tumour tissue, for example in lung cancer. This use of nanoparticles as transport vehicles was demonstrated by researchers from the Helmholtz Centre Munich and the Ludwig-Maximilian-University in Munich (LMU) in 2015. As useful as this application may be, it reveals one thing: nanoparticles are Trojan horses.

There are even socks that are impregnated with silver nanoparticles to prevent the odour of sweat. The problem of these socks represents the whole problem of nanotechnology: these silver nanoparticles are washed out after a few washes. The nano silver penetrates not only the lint filter but also every conceivable netting. The material ends up in sewage plants and rivers, in the soil and the sea. According to the latest studies, some 12 to 21 million tons of classic micro plastics in micrometer size are already detectable in the upper 200 meters of the Atlantic surface and are a huge problem. And these are only estimates - nobody knows how much plastic waste is found in total and further down. The upper 200 metres of water depth account for only 5 per cent of the total volume of the sea.

At the same time, nano-materials can form highly toxic combinations with each other, with entirely new modes of action that cannot be foreseen. And in the end, they will have access to all humans, plants and animals - to every cell. And we cannot eliminate them anymore.

The micro-plastics problem could be largely solved - if we were willing to invest a lot of money and effort: We could collect it, filter it out, recycle it and reuse it. But nanoparticles cannot be collected because they slip through any net or filter. Without rigorous disposal controls, once they are in circulation, there is nothing we could do about them. These materials are so small that they affect every organism, every cell complex, everything, whether in water, soil or whatever, every carrier material. We can no longer catch or collect them, and we could not turn the wheel back.

Many people, authorities and also states, are not yet aware of this dimension and the danger of nanoparticles - the so-called "nano-risks".  It is foreseeable that in humans and animals, nanoparticles can enter the entire body and organs, even the ecosystems of plants, insects and the environment. Given the experience with asbestos, the question arises as to whether even the surface properties of an utterly non-reactive nanoparticle (such as nano-graphite tubes) could possibly mimic the toxic effects of the sharp edges of an asbestos crystal, which are among the best-known causes of cancer.

Nano applications in food are correspondingly critical. Agriculture in the USA, but also in Canada and even organic agriculture in Austria deliberately use nano-copper particles as an alternative to the large-scale spraying of pesticides. "This is an open barn door," says Dr Thilo Hofmann, Deputy Head of the Centre for Microbiology and Environmental Systems Science at the University of Vienna. Nanotechnology can cause us irreversible damage. We and future generations could have to pay an extremely high price for this because in the long-term life expectancy, which in 1900 was only 31 years on average worldwide, but is now 80+, could fall again; as a result, our entire living space could be facing considerable destruction.

Although the development is highly dangerous - for us and even more so for all future generations - it seems that nobody wants to think the problem through, nobody wants to think about anything else but the promising first applications. Because of the hype, it seems that governments are turning a blind eye to the risks. The subject of nanotechnology is far more worrying than genetic manipulation, because humans have been doing the latter for centuries, although not through high-tech, but by breeding and crossing animals and plants.

Existing regulations on the part of the European Union (EU) can at best be described as lukewarm: For example, they have so far completely ignored the unexpected interactions nanoparticles can create among themselves, especially after their first application lifecycle. Just as there is the possibility with drugs that the active ingredients they contain can have a negative, even life-threatening effect for the patient on each other, this is no different with nano substances, only more complex by many dimensions. The chemicals regulation "REACH", for example, does not cover the problems - although it applies to all chemicals and thus also to nano-materials, it does not take their specific properties into account. Moreover, it is questionable whether the test methods used to date are at all suitable and sufficient to quantify the risks of nano-materials. Too often, entire industries have already adopted the "after me the deluge" approach as long as they were profiting from something in the short term.

The criticism from scientists at the University of Vienna is correspondingly concise: regulations for the protection of humans and the environment that cannot be implemented in practice must be adapted; a better differentiation is needed between technical and scientific aspects on the one hand and political aspects regarding risk management on the other; manufacturers should prove the origin of the nano-materials , and limit values should not refer to the number of different processed nano-materials, but their mass.

The question of the medical aspects and safety of nanoparticle products is anything but simple. The regulatory authorities are obviously struggling to find some clarity. Those responsible seem to believe that the nanotechnology industry is self-regulating. But it is not. Asking them primarily to follow the rules for existing substances and materials and otherwise to report on their activities and document the precautions they intend to take for each product is utterly inadequate, given the potential dangers.

The necessary requirements are therefore distinct: nanomaterials need built-in algorithms for their self-destruction; the strictly controlled disposal or incineration of nano material substances must be ensured; and above all, very strict regulations, controls and liabilities are needed for the development, production, distribution and handling of nano materials.

Another critical issue is the product safety of products made of or with nano materials. Since nanoparticles could potentially penetrate all membrane barriers and could therefore easily enter the bloodstream and cycle, such products require labelling of all the hazards they pose.

The current labelling of products as "nano" only says something about the size, but nothing about possible risks or the toxicity of the substances. A substance such as titanium dioxide, which turns the colour of walls white and is used in toothpaste and sunscreens, can have completely different, harmful, even dangerous properties as a nanoparticle - but there is no indication of this on the packaging. Also, if meat producers enrich packaging with silver nanoparticles to keep sausages fresh for longer, there is no adequate indication of this on the packaging so far.

How exactly nanotechnology and its nanoparticles work in reality will probably only be seen in decades, when masses of these materials and substances will be in circulation and in the environment. But then it will be too late to intervene. Because by then these nanoparticles, nano materials and nano-substances will have spread everywhere - and we will not know how to remove them from nature, our environment, food and our bodies. We should finally understand that we and all subsequent generations have no Plan B for our planet, our habitat. There is no alternative to the earth for us! Therefore our most important element of life, water, as well as flora and fauna, is not there to be abused, polluted or contaminated. With this, we are only sawing the trunk of our tree of life around ourselves. We know that, but we do too little about it. All governments and nanotechnology researchers and product developers in the world are therefore called upon to seriously address the issue: because nanoparticles can easily become a poison and a silent enemy of all life.