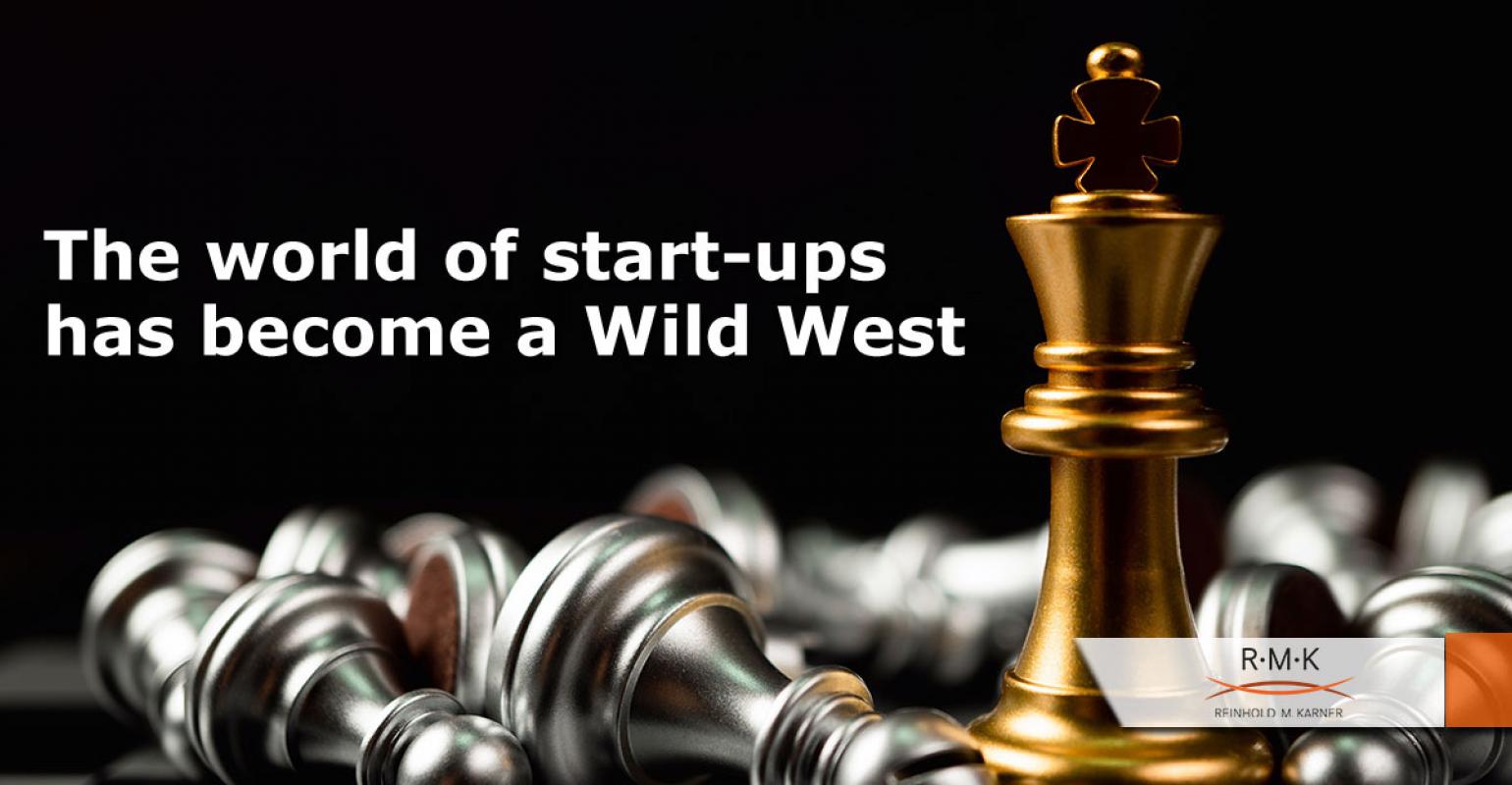 The world of start-ups has become a Wild West

The modern start-up culture has turned into a harmful fashion. Alarmingly, it produces up to 80 per cent of doomed cases.
This article I’ve first published in The Sunday Times of Malta (cover page of „classified“)

The modern start-up culture has turned into a harmful fashion. Alarmingly, it produces up to 80 per cent of doomed cases. Over two-thirds of the entrepreneurs failing at their first business get largely broke, traumatised and, in many countries, even stigmatised. Thus, they will never try again. Those few who try a second time have no better chances of success.

We must fix this as we need sufficient new blood, especially as young firms generate new jobs and the average lifespan of established businesses is shrinking, as thoroughly addressed in my article in The Sunday Times of Malta on October 10.

On the one hand, it’s encouraging to see that EY’s Youth Survey 2021 for Malta shows that approximately 60 per cent of the Millennials (born 1981-1996) and Gen-Z (born 1997-2012) dream of becoming entrepreneurs rather than employees. On the other hand, this result puts its finger precisely on the wound.

It’s vital to evaluate why they state they want to become entrepreneurs. I’m pretty sure one will find the same dominant pattern, as in most developed countries, that seeded this toxic modern start-up fad.

The trouble is that young people’s primary motivation for entrepreneurship is a misguided belief that it’s a fast, automatic route to wealth, fun and luxury. Materialism and lifestyle would be driving that result as opposed to more grounded reasoning. The prevailing mentality would be “entrepreneur = money-making”. But this in no way reflects the reality. The dot-com bubble of the new economy is dead; the dreams of Silicon Valley with jets and yachts for everyone will never exist.

Only a few of the ‘wannapreneurs‘ would appreciate who entrepreneurs are and what they really do. An entrepreneur is not a job title but a deep-rooted state of mind of people who want to alter the future by exploiting an innovative idea that they develop, copy, improve or rent to start a profit-seeking, scalable business that successfully satisfies the demand for a new or better product or service. Too many are neither aware of it nor willing to do the work it takes to build a sustainable company, which is the most challenging work in business.

Millions of people dream of emulating the romanticised narrative of a handful of wildly successful founders of the Digital Dragons, high-tech corporations or pitching start-up entrepreneurs from TV shows as Dragons’ Den or alike, unfortunately transforming the founders’ aim for start-ups in the process into a vehicle to get to a cash-out for them and their venture capitalists (VCs) as quickly as possible.

“The trouble is that young people’s primary motivation for entrepreneurship is a misguided belief that it’s a fast, automatic route to wealth, fun and luxury”

In reality, most of the 20 to 30 per cent of start-ups that survive the first five years are, on average, not profitable before they reach their seventh year and won’t manage to go public before their 12th year. Nevertheless, the most suggested time to cash out, called an “exit” in business plan parlance, is only four years.

Precisely this has sadly changed the very nature of what many founders and investors see as the motivation for starting new businesses. The consequences are devastating.

Unfortunately, this blinkered look challenges a fact-based discussion of what successful entrepreneurship in reality takes and how few actionable lessons these romanticised narratives hold for the 95 per cent of ordinary first-time entrepreneurs. Let alone dreaming of developing a ‘unicorn’, which means a start-up that reaches the valuation of $1 billion. While it’s not impossible, attaining unicorn status is incredibly difficult. In fact, a business only has a 0.00006 per cent chance of becoming one, similar to gambling.

The age-old, very sustainable process of starting a business had begun to change during the 1980s when business students became interested in emulating the very few business rock stars like Bill Gates and Steve Jobs.

At that time, just a few business schools paid attention to how one could help set up new businesses to flourish. But when universities realised that their students were ready to forego careers as managers to start their ventures, business professors responded with first courses.

At that time, the term ‘entrepreneur’ – derived from the French word ‘entreprendre’ (from 1723), which means ‘to undertake’, ‘to pursue opportunities’ or ‘to fulfil needs and wants through innovation and starring businesses’ – was not even well known.

Still, it’s not helpful that many entrepreneurship educations are developed and lectured by, undoubtedly, the best intentions of academics but who mostly have neither worked on the frontline of the business world, nor started or ran their own company, nor went through hell and heaven of the entrepreneurship’s curse. The theory is essential but, by far, not enough.

One does not become a good driver by just studying the car manual and highway code. And properly training the ecosystem partners and the mentors have also been largely neglected. The fact is, too many of the latter, who undoubtedly mean well, are unfortunately as toxic as helpful due to a lack of proper preparation for this advisory activity.

But more adversity followed, as the bestselling author, John Mullins, from the London Business School, so aptly stated: “Sadly, VCs and the rest of the entrepreneurial ecosystem hijacked the financing limelight a couple of generations ago in Silicon Valley and Boston and now most everywhere else. They convinced entrepreneurs that writing business plans and raising start-up funding were the only ways to start a business. Dead wrong.”

We shouldn’t be surprised about the disastrous nose-diving developments regarding the start-up culture and its high failure rates. As entering in this venture with a get-rich-quick motivation, with too little clue what it means and takes to become a successful entrepreneur, not being solid educated, well-prepared and willing to take on the arduous work, including the significant risks and responsibilities, it just can’t lead to a robust, successful outcome.

In my view, it is irresponsible how we deal with our young talents on it. Economically, we are only harming ourselves and putting our future prosperity at risk. It doesn’t take rocket science to understand that the strongly promoted two-part doctrine, believed that producing successful new businesses, doesn’t work either: every new company should start with a written business plan designed to appeal to VCs and the belief that the chance of success for any new business is improved if it incubates in a supportive entrepreneurial ecosystem.

Successfully bringing up a start-up in an environment of its messy first years is a hard-core trial-and-error adventure. According to my experience, there is no great art to success, but great art to maintain success; that’s a perpetual challenge that follows its own rules.

“The theory is essential but, by far, not enough”

Still, learning from the hands-on experience of masters in the 360° entrepreneurship instead of the romanticised narrative would be a great ingredient.

As an essential first step to fix the negative impacts of the current start-up culture, I strongly recommend improving entrepreneurship education and correcting the misguided belief of potential young entrepreneurs. Sure, it takes even more steps, including more failure-friendly laws, to master a turnaround.

A country that manages to fix this will create significant long-term competitive advantages for its economy, citizens and prosperity and breed happy entrepreneurs. Therefore, I’ll tirelessly continue to advocate with reasonable proposals.